A1 Adria League new 9th Season – Here’s what it brings! 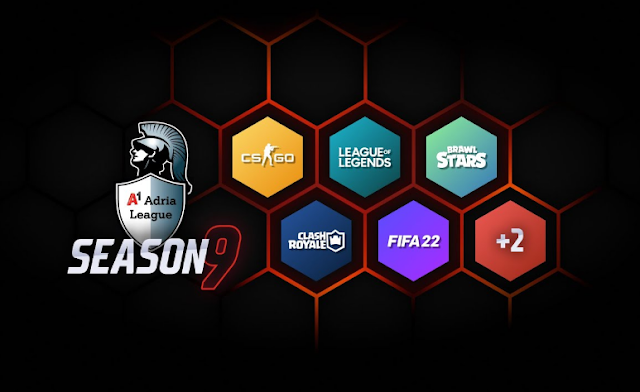 Qualifications are about to start, and with the already standard games CS: GO, FIFA 21 and Brawl Stars, the best gamers in the region will have the opportunity to try out four more popular titles, including League of Legends and Clash Royale, but also two that will be revealed. subsequently.

Last year was marked by two more successful seasons of the A1 Adria League in which records were broken. Regional sports fans watched almost 29,000 hours of exciting content with 463,000 views on the YouTube channel alone. Despite the coronavirus pandemic, two finals were held as part of Reboot Online Games Week, and the best local Brawl Stars players, Lavvek, DzonDzon and Andrey, defended the colors of our region at the pan-European Clash of Leagues competition.

For 2022, the format and appearance of the league have been adjusted. The tempting prize fund of 200,000 kuna will have the opportunity to win the largest number of players so far. Instead of four games, in the ninth season of the A1 Adria League there will be as many as eight. CS: GO, FIFA 22 and Brawl Stars will remain in the tried and tested format, with minor changes, while the new four games will be held on weekends according to the principle of open qualifiers and the final tournament. We will once again crown the best League of Legends players in the region, and Clash Royale is back, with two surprise games. Which games are in question will be revealed later.

Brawl Stars were dominated by Lavvek and the Flow team, which won the title of the eighth season champion of the A1AL. Behind them are the teams Winx Club, Omert4 and Lightning Strike.

FIFA 21 was no less interesting. Amke lifted the trophy for the third time in a row and confirmed that he is the best player in the region, while esad1memic and brstimir again had to settle for second and third place, respectively.

Team Metamoon had to beat fierce competition for the League of Legends trophy: Clouded Leopards, Harmony and 49% winrate. After losing to Harmony in the semifinals, they managed to return to the finals with a 49% winrate victory and take revenge on Harmony in the most important match of the tournament.

The ninth season of the A1AL will begin with the Brawl Stars qualifiers on March 31 and the FIFA 22 qualifiers on April 1. Qualifiers for CS: GO start a little later, on April 10, while for the remaining games the qualifiers will be held during April and May, starting on April 16.

A1 Gaming Weekends are returning in record numbers. As many as six of them will be held between the ninth and tenth seasons, so that sports and gaming entertainment will be available throughout the year. Regional gamers will have the opportunity to compete and enjoy even more games in a slightly more relaxed format.

Also, in June, another edition of the gaming festival Reboot Online Games Week powered by A1 will be held in Osijek, as part of which we will find out the winners of the 9th season of the A1 Adria League. The grand finale will coincide with the Pannonian Challenge, a world station of competition in extreme disciplines such as BMX, skate, inline and scooter. In those days, Osijek will be the center of extreme sports, good music and everything else that makes top entertainment.

READ MORE: Gran Turismo 7: A week before its launch, this new trailer shows its impressive realism