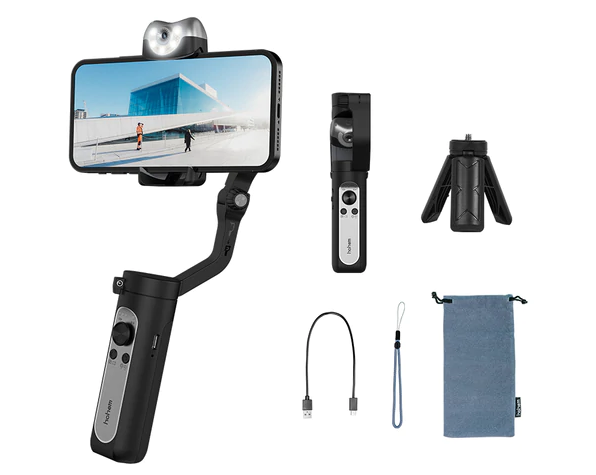 Although many smartphones have built-in optical image stabilization, they cannot be compared to gimbal devices such as the Hohem iSteady V2, which we found at a very low price on the popular Cafago webshop.

In addition to stabilizing the video you record on your smartphone, they also have some other handy features so you can capture some very interesting tricks with rotating the camera. It also supports gestures, has 3-axis stabilization and is very easy to use. We found the Hohem iSteady V2 at a special discounted price on the Cafago webshop , and it can help you a lot in shooting better video.

It is ergonomically designed, the handle is made of non-slip leather so it will stand firmly in your hand. The device also supports artificial intelligence (AI) so it will track the subject you are shooting. For stabilization, it uses the advanced Equipped with iSteady 4.0 system so that the recorded video will look incredibly quiet and stable, especially if you are on the move or if you are shooting moving objects or people.

This gimbal is very light and has compact dimensions of 17.9 x 7.9 x 3.9 centimeters and weighs only 259 grams and is compatible with Android and iOS operating systems. In a special application “Hohem Pro” will provide you with a number of additional shooting modes such as Beauty Mode, Moment Mode, Dolly Zoom and many more.

It has a built-in 2800mAh battery and it will last up to 9 hours of operation, depending on which mode you are in. What we find particularly interesting is that it has a built-in special LED light in three levels, so the recorded video will be even better, even in low light conditions.

Hohem iSteady V2 is a modern gimbal with many different functions and possibilities, it can shoot horizontally and vertically, and it is sold on the popular Cafago webshop at a special discounted price of only € 96.65, and as it is in stock in Germany, your address will reach in a few days you will not have to pay any additional taxes. By the way, this price is valid until the end of the month, ie until April 30.

"We, the leaders of the Group of Seven, categorically condemn the false referendum, which Russia is trying to use as a false pretext to...
Read more