Oscars 2022 looks: The Boldest Looks from the Red Carpet 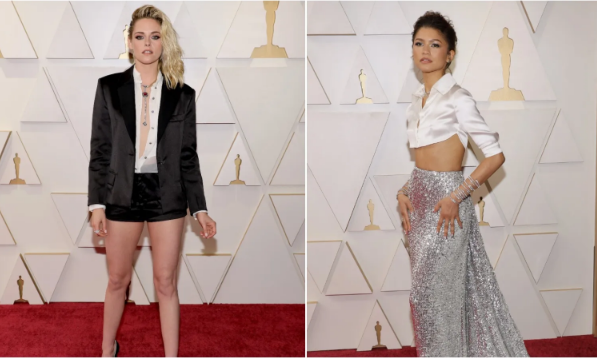 When it comes to the Oscars, there are always those celebrities who dare in their looks. Check out some of this year’s most “different” looks

Yesterday, March 27th, the long-awaited 2022 Oscars ceremony took place . The awards had incredible stars, emotional speeches and even some controversies, but something else also caught attention at the event: the red carpet looks.

Among the famous, there were those who bet on safer and error-free looks. However, some looks a little more daring and “different” also appeared on the red carpet , which may even divide opinions.

Here are some of these more daring and surprising looks of the celebrities on the red carpet of the Oscars 2022:

Tailoring instead of dress

Although the most common among celebrities on the Oscar red carpet is still wearing a dress, more and more celebrities have broken this dresscode and opted for a little more daring looks. And, this year, several celebrities who left the single piece aside wore tailored clothes instead , which even reflects the recent trend of more comfortable fashion.

One of the stars who opted for a different look for the dress was Zendaya , from “Duna”, who wore a white cropped shirt and a black Valentino skirt. The actress’ look also featured several bracelets as accessories and was one of the most talked about of the night, proving that Zendaya really is a great fashion icon for the new generations.

But even bolder was Kristen Stewart , nominated for an Oscar for Best Actress for “Spencer”. In addition to changing the dress for the tailoring pieces, the actress also bet on a short black short for her look , which also had a white dress shirt almost completely open and a black blazer.

And, looking at these looks, let’s agree that an Oscar look doesn’t really have to be a dress to be beautiful and super elegant, right?

Another thing that caught the eye in some red carpet looks were the bold cutouts.

The biggest example of this is the looks worn by sisters Chloe and Halle Bailey . After all, both the singer and the actress who will play Ariel in the live-action of “The Little Mermaid” appeared on the red carpet with looks with large slits that left part of the crotch on display. Pretty bold, right?

And it wasn’t just with the big slits that the famous dared in the dresses for the red carpet of the Oscars 2022, see? They also appeared at the event dressed in very different formats from the most basic and common.

The silk, strapless Armani dress worn by Nicole Kidman, nominated for Best Actress for “Introducing the Richards,” for example, had a very different build, with a lot of volume at the hip . Another interesting curiosity about the look is that its blue-grey color was made especially for the actress’ look for the red carpet.

And is there a more “different” look for the Oscars red carpet than one with a renaissance painting stamped on it? This was the bet of makeup artist Eva Von Bahr, nominated for the Best Hair and Makeup category for “Duna”, who chose for the event a dress with a print by the painter Rafael. In addition, the makeup artist also completed the look with a bag in the shape of a sculpture. Quite different, right?

The Secretary General of the United Nations will remind the leaders of the states that the world is facing a "great danger". After a...
Read more